‘Sleeping Giants’ is the fourth in the ‘Harry’s Game’ series of books, which follow the adventures of Harriet Cornwall, a young woman who finds herself at the centre of world War two, as she experiences some of history’s pivotal moments from a unique vantage point.

Having narrowly escaped death in the skies over Malta, Harriet Cornwall is left to make a new life when her injuries leave her grounded, and unable to fly.

Despite being safe from the physical and emotional exhaustion of near constant combat, Harriet quickly becomes frustrated with her life on the ground; and through a series of unexpected events she finds herself facing a new enemy in a new world, where she must rely on everything she’s learned in combat just to stay alive.

Sleeping Giants was released in January 2021, and is available in both digital and paperback format through Amazon 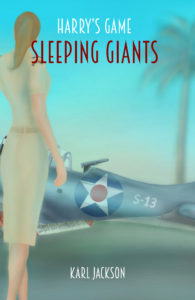